'They didn't say it': crowd fails to respond with Tlaib impeachment pejorative directed at Trump at rally 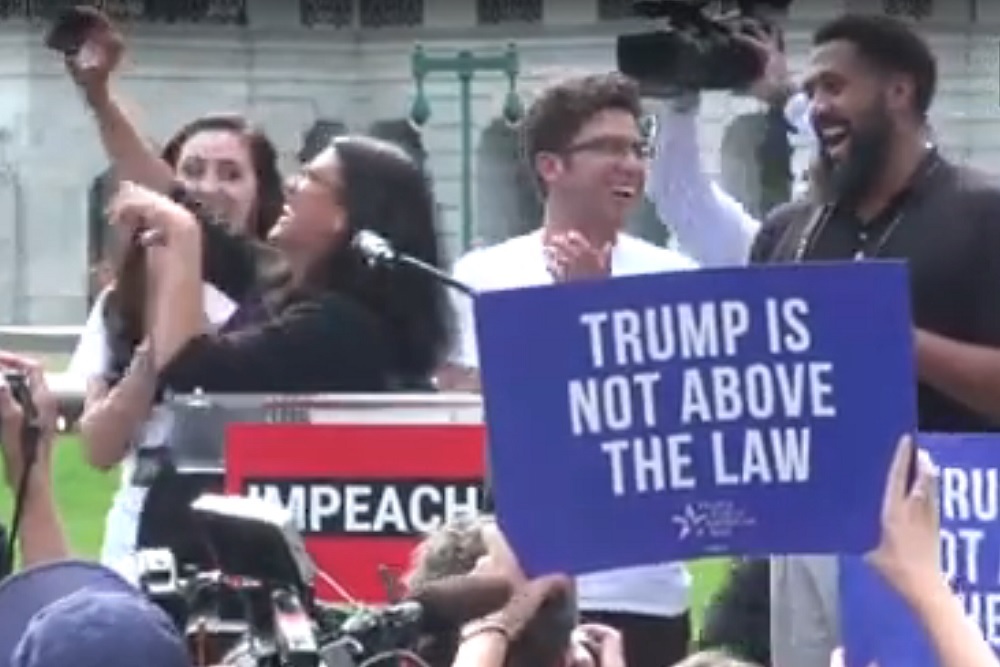 "They didn't say it," U.S. House Rep. Rashida Harbi Tlaib says to an aide after she failed to get the crowd to respond with a perjorative about impeaching the president. | youtube.com/watch?v=PB5w8BKAfzw&feature=youtu.be

Freshman U.S. House Rep. Rashida Harbi Tlaib is trying to make profane language directed at President Donald Trump into a slogan for her 2020 re-election campaign but recently found that at least some of her supporters haven't gotten the memo.

During a recent rally at the Capitol in Washington, Tlaib failed to get a small crowd of wildly cheering supporters to repeat the expected response of "the m----- f-----" to her "We are ready to impeach."

Tlaib, who represents Michigan's 13th District, has been trying to cash in on the wave of support from Democrats pushing an impeachment inquiry against Trump. Among other things, Tlaib is selling T-shirts - at $29 each - bearing her apparent slogan “Impeach the mf” as a fundraiser for her 2020 campaign, which the Detroit Free Press called "risky."

Meanwhile, the House Ethics Committee has begun a review of potential campaign finance violation by Tlaib during her campaign last year when she won her first term.

During the rally last week at the Capitol, video of which was posted to YouTube by America Rising ICYMI, Tlaib appeared so convinced that she had the crowd primed and ready with the pejorative response she expected that she wanted to record it.

"And I have to tell you, before I go, I would to love videotape this," she told the crowd. "Do you mind? I'm going to do this."

The crowd responded with scattered laughter and clapping but it wasn't clear that anyone agreed.

"So, I'm going to start - I don't care Reggie," she said to someone to her left as she lifted her cellphone to record the crowd.

"I'm here at an impeachment rally," she said as she began taping the crowd. "And we are ready to impeach the . . . "

She then thanked the crowd and quickly left the podium.

Tlaib reportedly has had success getting supporters at other rallies to repeat the pejorative slogan.

Want to get notified whenever we write about U.S House of Representatives ?

Sign-up Next time we write about U.S House of Representatives, we'll email you a link to the story. You may edit your settings or unsubscribe at any time.